There are three sides or aspects to achieving an optimum manufacturing process – determining the underlying molecular processes; designing the engineering equipment; operating the factories.   The Systems Technology diagram shows the place of Molecular and Factory processes in the overall Process Manufacturing System. 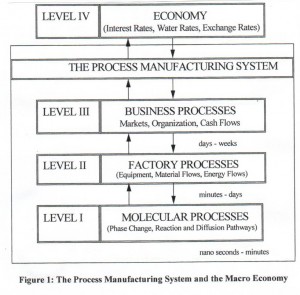 For an established operating process, the molecular processes (level I) will be fixed, but may need further understanding and quantifying, particularly in respect of their responses to temperature in order to systematically improve the process. Likewise, pre-existing engineering equipment (level II) may be susceptible only to modification or replacement in part. Most scope for improvement of an existing industrial process will then lie in level II as a combination of engineering modifications and computer-based operational control in the light of knowledge of the molecular processes at level I. “Innovation” in either product or process will require research in both levels of course.

The fundamental approach adopted for both levels I and II is founded on four principles:

(1) Scientific investigation is required in both levels.

(2) Essentially the same mechanistic mathematical model, however rudimentary the beginnings, should over time be developed to represent all scales of operation from laboratory, through pilot plant, to the full scale. In this way, all data, systematically gathered over time and retained from all scales, will contribute to self-consistent improvements of what may usefully be termed the “System Model”. This can be applied to both contemporary operations and future research.

(3) In this work, System Models are all based on the same architecture: namely the Flow, Kinetics, and Transfer (FKT) equations applied to one or more Cells.

By Flow is meant the bulk movement of materials into and out of a Cell; by Kinetics we mean the rates of transformation within a Cell of one set of materials into another of different chemical composition, physical state or shape; by Transfer we mean transfer of heat and/or momentum across the Cell boundaries. By Cell is meant a region of physical, biological, or economic space to which FKT equations may be applied. Cells can be the whole process manufacturing system or more usually a nested structure of cells within it.

(4) Operating a manufacturing process generates cash from sales and incurs costs from the purchase of materials and utilities, and the hire of labour and capital (Figure 1, level III). These cash flows (F), hire costs (K), together with taxes and interest (T) may be combined in an “Economic Model” (see Industry and Economics/Economic Engineering) whose structure is basically the same as the FKT structure of the systems model in levels I and II. Usually only parts of the System Model will be used in any one investigation, but common parameters will have the same values in all parts.

The three levels I, II and III constitute the Process Manufacturing System in which, for both Improvement and Innovation, information moves between the three levels. In Figure 1, the combination of the (Technical) System Model and the Economic Model represent mathematically the whole Process Manufacturing (PM) System and may be termed the Techno-Economic Model (TEM). The actual computerised methods for the solution of the model equations and the design of control systems based on them is described in the Systems Technology section of the Science of Industrial Processes.

The TEM should, in however rudimentary a form, be the basis of the research operations, sales, and financial operations of the PM System.

Improvement in consistency is the constant goal of all manufacture once the basic performance variables have been established at practicable levels of discrimination.

By consistency is meant the production of a product – a gas, liquid, solid component – which is sufficiently the same over time and from each production stream that each part of the overall production can be interchanged with any other. Pharmaceuticals pose a particular example of consistency requirement with byproduct contents having to be lower than the prescribed safe levels.

In Mechanical Manufacture (MM), consistency means that one component from one production stream can be assembled to a component from another production stream with a defined failure rate, usually these days of 1 in 107 or better. This means the dimensions of the components must be invariable in time at this level of consistency and uniform in space (i.e. across similar streams) at this level too.

In Process Manufacture (PM), consistency is likewise needed so that a fluid is uniform in space and invariable in time to given levels of discrimination. However unlike mechanical (assembly) manufacture, chemical variations can be smoothed or merged away, usually by mixing, on time and space scales which are below the level of discrimination in the product. But these discrimination levels have to be established first on the industrial and marketing scales and then, via the systems model, related to the engineering and molecular scales. This cannot be done just in the laboratory using single stream, lab-scale equipment.

Often, “black box” sampling methods are used by factory staff to measure achieved consistencies on a plant – usually by obtaining data in the form of means and variances (following the methods of R A Fisher). These are essentially characteristic of current operations. The science of process manufacture (SPM), treats this data as experimental data to test and improve the system models which in turn will allow us to make major changes away from the current position. For most manufacturing processes, this is a never-ending task as standards expected by customers are continuously raised.

As noted in the Preface to the Science of Industrial Processes, synthetic polymer fibres manufacture for textiles is the outstanding example of combined MM and PM of the most complex and demanding kind. Integrated circuit manufacture is the only comparable manufacturing process in terms of the consistency required to make saleable products on a world scale.