This section is concerned with methods and data for predicting the commercial value of the technologies described in the Science and Engineering section. The methodology is not limited to these technologies: in principle it applies to any knowledge-based project or enterprise whether of the innovation or improvement type. A list of the industrial projects undertaken is given in the People and Places section of this website under Full CV Stephen Bush. References are made to some of these under Papers and Reports in this section.

The commercial value of an innovation or improvement can only be assessed over specified periods of time which cover the costs of laboratory investigations and prototype manufacture, manufacturing plant trials, market trials, the capital cost of full-scale plant or plant changes, and the building of sales and marketing teams. Running costs for the operating plant include raw materials, fuel, labour and utilities. Which of these items are needed will depend primarily on whether we are dealing with a product innovation – where all will eventually be needed – or a product or process improvement where sales and marketing teams will usually be pre-existing. Balancing all these costs (hopefully) is the income from sales.

The fundamental equation for carrying out this balancing is the economic version of the FCT equation introduced in the Science of Process Manufacture. NB Cash flows are in the opposite direction to Material, Energy and Services flows. 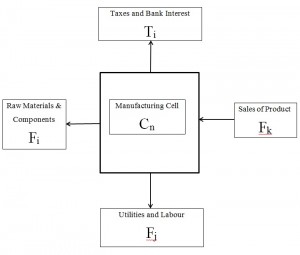 The fact that income comes later than most costs means that money must be provided in the research and building stages of a project and paid back, with interest, in the later stages. Some enterprises will incur substantial decommissioning costs at the end of the project life, oil and nuclear being the outstanding examples. These costs must be factored in, both financially and in terms of engineering design.

Given these different possibilities, the time scales over which research, design and capital expenditures must be recovered, and the possible changes in external conditions – principally interest rates and likely developments by competitors – chiefly in cost and quality – it has been found necessary to express the variables and their relationships in a mathematical form termed the Techno Economic Model, TEM[1].

Together with a wide range of empirical data on costs of equipment, of heat and mass flows[2], of management and labour, and of knowledge in various categories, the TEM is the mathematical expression of what may be termed “Economic Engineering”. When you add retail and financial sub-sections (e.g. banking, currency exchange), Economic Engineering becomes in fact a new prototype theory of the macro economy as well as of individual industries and firms based on actual “white box” business mechanisms[3] rather than the “black box” correlation approach adopted in the models used by various agencies including HM Treasury and the National Institute of Economic and Social Research (NIESR).

For manufacturing and energy conversion processes, “Economic Engineering” is represented chiefly by the TEM, System Technology Concepts, Linear Programming Models, together with a mass of empirical data which connects engineering functions such as heat transfer, mixing, pumping, casting, moulding, to their costs in a broad way. The objective is to make an estimate[4] of the capital and running costs of a manufacturing or energy conversion process which can select various outline candidate processes as the most promising for more detailed examination[5].

In the process manufacture field, the most common engineering function is heat transfer. The question can then be posed for example as part of a proposed design: how much heat has to be transferred per tonne of material processed per hour, and what would its capital cost be? The data bank provides a “cost of heat transfer” in a variety of materials which then becomes part of the total capital cost to be fed into the TEM as described above.

[4] Sometimes referred to as class C estimates, i.e. for “Candidate”.

[5] This would then be a class B estimate to make a final choice of process. Class A would be the detailed estimate against which tenders would be invited to build the chosen design.